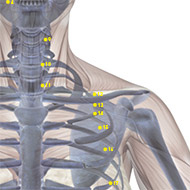 Chlamydia infection, often simply known as chlamydia, is a sexually transmitted infection caused by the bacterium Chlamydia trachomatis. Most people who are infected have no symptoms. When symptoms do develop this can take a few weeks following infection to occur. Symptoms in women may include vaginal discharge or burning with urination. Symptoms in men may include discharge from the penis, burning with urination, or pain and swelling of one or both testicles. The infection can spread to the upper genital tract in women causing pelvic inflammatory disease, which may result in future infertility or ectopic pregnancy.1