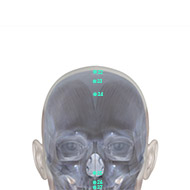 Acupuncture treatment for Down Syndrome

Down syndrome, also known as trisomy 21, is a genetic disorder caused by the presence of all or part of a third copy of chromosome 21. It is typically associated with physical growth delays, characteristic facial features and mild to moderate intellectual disability. The average IQ of a young adult with Down syndrome is 50, equivalent to the mental ability of an 8- or 9-year-old child, but this can vary widely. Subjects with this condition have low muscle tone, small stature and upward slant of the eyes. Many children with Down syndrome are also born with heart, intestine, ear, or breathing problems. These health conditions often lead to other problems, such as airway (respiratory) infections or hearing loss. In addition, they tend to have certain features, such as a flat face and a short neck. Down syndrome is a lifelong condition. But with care and support, children who have Down syndrome can grow up to have healthy, happy, productive lives, since most of these problems can be treated.1

An infant with Down syndrome can be born with normal size but will develop more slowly than a child without the condition. A person with Down syndrome usually have some degree of mental disability, but it’s often mild to moderate. Mental and social development delays may mean that the child could have: impulsive behavior, poor judgment, short attention span and slow learning capabilities. Medical complications often accompany Down syndrome. These may include: congenital heart defects, hearing loss, poor vision, cataracts (clouded eyes), hip problems, such as dislocations, leukemia, chronic constipation, sleep apnea (interrupted breathing during sleep), dementia (thought and memory problems), hypothyroidism (low thyroid function), obesity, late tooth growth, causing problems with chewing and Alzheimer’s, in later life. People with Down syndrome are also more prone to infection. They may struggle with respiratory infections, urinary tract infections, and skin infections. Since they typically have poor immune function and generally reach developmental milestones at a later age.2

As explained above, the Down syndrome is a genetic disorder caused by the presence of all or part of a third copy of chromosome 21. Furthermore, Down syndrome is one of the most common chromosome abnormalities in humans. It occurs in about one per 1000 babies born each year. In 2015, Down syndrome was present in 5.4 million individuals and resulted in 27,000 deaths down from 43,000 deaths in 1990. It is named after John Langdon Down, the British doctor who fully described the syndrome in 1866. Some aspects of the condition were described earlier by Jean-Étienne Dominique Esquirol in 1838 and Édouard Séguin in 1844. In 1957, the genetic cause of Down syndrome, an extra copy of chromosome 21, was discovered.3

Acupuncture may not completely cure the Down syndrome, but it can treat some of its symptoms. If the patient is a very young children the treatment period can take up to 4 years. Acupuncture sees the Down syndrome as a disorder that is caused by something wrong in the kidney. This kidney condition is expected to make the condition called dampness and distinctive heat to exist. In order to treat the dampness, the acupuncturist should treat the patient by needling at acupoints BL-23 (Shen Shu ), KI-3 (Tai Xi), CV-4 (Guan Yuan), GV-16 (Feng Fu ), GV-15 (Ya Men ), BL-10 (Tian Zhu). While heat is treated by targeting the acupoints LI-2 (Xing Jian), HE-8 (Shao Fu), GB-20 (Feng Chi), CV-23 (Lian Quan), HE-5 (Tong Li), BL-23 (Shen Shu). Acupuncturists might also use another tool other than needles, especially if the patient is still very young. In addition, acupuncturists can also use crystals to replace needle for this case.4